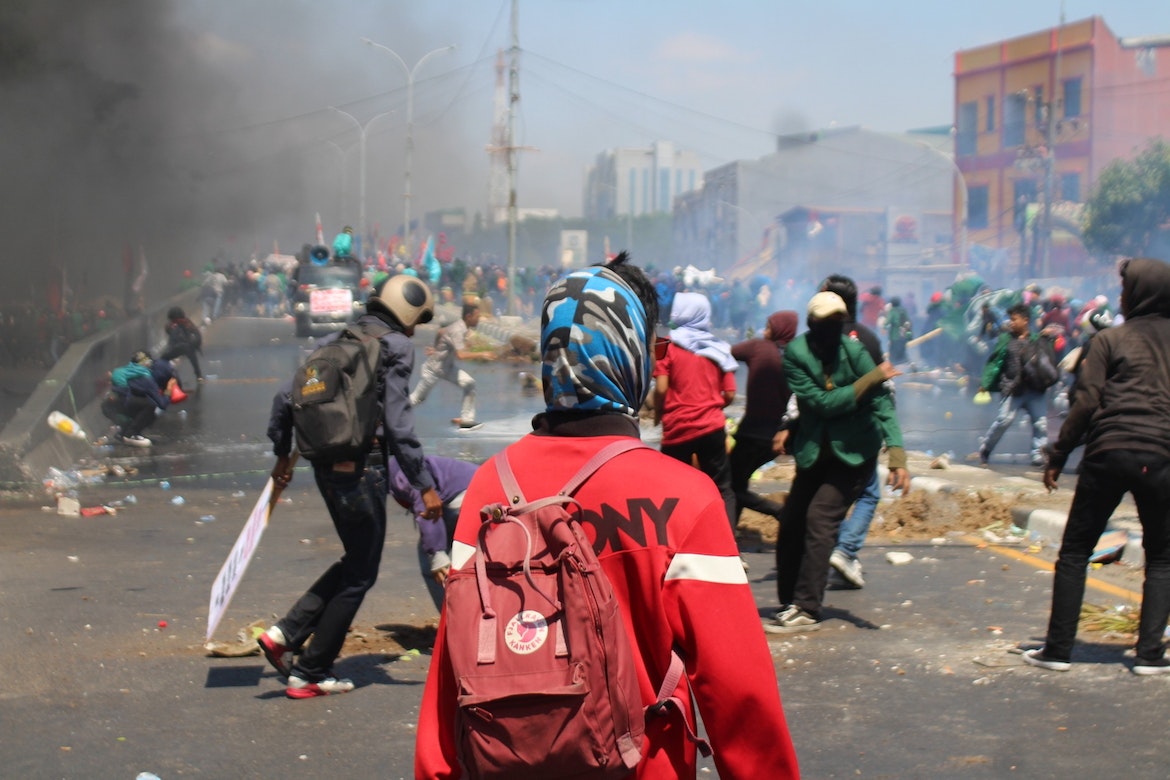 As we enter the year 2020 we can anticipate further political chaos and agitation on the streets of America. It is difficult to predict how violent or widespread civil disorder will be, but it is something most should be prepared for.  Even those living in rural areas can be affected by the economic and social impact of any breakdown in law and order in their region.   The article below was published in Live Free’s newsletter last year.  For more detailed survival information on a wide range of topics, we hope you will join.

We live in an unstable and increasingly unsafe society.  While a sense of normalcy and safety still prevails the indications of societal disintegration and impending social chaos abound.  The sheer multiplicity of negative trends and events constantly weakens our capacity to maintain order and safety.

Increasingly frequent natural and manmade disasters drain our economy and overstretch our emergency response resources. The following list of challenges and trends should convince any responsible citizen that a dark-age of civil chaos and general lawlessness lies ahead.

While some of these trends have marked previous times in American history and one or two of them alone could not be expected to generate a general collapse of law-and-order in our society, if continued, the combined effects of these trends may well lead to an unprecedented level of chaos and violence within the next few years. The period of violence and civil disorder generated by the combination of issues and agitation in the late 1960s and early 1970s offers some valuable lessons and examples.  I living in Chicago during these times, I witnessed the causations and effects of the violent events of those times.  The civil-rights movement, the anti-Viet Nam War movement and several other social/political movement were coopted by communists, and special interest groups with dark agendas.  Certainly the Soviet Union financed the more violent groups in order to weaken the United States.  Big financial interests benefited from massive real-estate displacements and public housing developments.  Government agencies grew stronger and more intrusive. So-called revolutionary groups abounded with shooting, looting and bombing culminating in the great riots that destroyed whole communities and initiated a trend towards disrespect, division and crime that continues to this day. At that time America still had a solid middle class and a foundation of shared conservative values that was sufficient to check the slide toward outright revolution and disaster.  The “greatest generation” of citizens who had built America and defeated tyrants and aggressors in World War Two were the dominant population then. Regrettably, today’s population lacks these unifying values and shared sense of responsibility.

The riots and demonstrations of the 1960s and 1970s were contained within the inner-cities and to downtown and government facilities.  While I lived in Chicago during these times and I certainly knew enough to avoid going downtown or through certain areas, life went on as normal for the great majority. Crime and looting did not spill-over into adjoining communities or suburbs.  Although there was real concern that these disruptions could generate a true revolution America was far too strong and unified and these movements eventually (literally and figuratively) burned themselves out.  They did however implant ideas, trends and cultures that have continued to weaken, destabilize and divide American society as we face a new age of internal conflict.

Previously, the dominant social force in America has been conservative, self-reliant, America values that were resistant to any “isum” or extremist views.  This central, law-abiding mass tended to dampen any tendency towards violence.  Unfortunately the dominant tendencies today are dependency oriented, self-centered and disrespectful of society and other individuals. The media and the internet can easily foment nation-wide discontent leading to violence that would affect every community.

Today’s more homogenous communities make it far more probable that any general uprisings will spill into adjoining communities than was true in the 60s and 70s.  Shopping centers in more affluent and “safe” communities will not likely be spared.  Gangs and bands of criminals will not be hesitant to roam widely as police are over-occupied or driven away. This is already evident in the kinds of crime-waves being experienced in most suburban areas now.

Today criminals use google earth to locate affluent homes and shopping centers now and will be able to use this tool along with social-media to organize raids and looting.  No area will be immune to attack during any future outbreak.

Having made my case that law-and-order is already breaking down and could easily degenerate into wide-spread and long-term chaos, let’s consider what steps the responsible citizen can take to survive, avoid or escape from violence ravaged areas.

The survival challenges will differ depending on your location, but there will be no “safe zones”.  Violence and war tends to flow in various ways, so that one part of a town may be ravaged to ruination while another is relatively untouched.  Even in places like Berlin during World War Two or modern day Bagdad there were/are areas relatively untouched and nearly normal, but no-one can assume that their home or community will be spared.  We can predict that some kinds of areas will be more dangerous than others and have different challenges that will require differing preparations and responses. Let’s call them “red zones”, “orange zones” and “yellow zones”.

Red Zones would be inner city, high population density and high value commercial centers where crime rates are already high, gangs have established a solid footing and any disruption to police protection, utilities or support can quickly flash into uncontrollable violence, looting, fires and crime.  The police barley maintain control of such regions today and would be virtually helpless against a general collapse.

Orange Zones would usually be communities adjoining the Red Zones, suburbs of major cities, and medium sized towns.  Such areas will have gang presents and local criminals that will seize on opportunities. They have active contacts with the larger Red Zone political extremists and criminal gangs and could facilitate their entry into these communities.  The police forces in such areas are often undermanned, but are dedicated to defending their home towns.

Yellow Zones can be defined as remote small towns and semi-rural areas, away from main highways and commercial centers. While it is unlikely that such locations would initially be the sites of riots or looting they might not be immune to locally generated crimes and acts of violence by individuals and small groups. Drug gangs and extremist groups of all kinds have infiltrated even seemingly peaceful communities. Radicals and criminals are far more mobile than they were decades ago, and isolated and complacent communities could be tempting targets. Such areas often have just a few law enforcement officers who are ill-equipped to handle such threats.

While there are far too many factors in-play to predict when a period of general civil; disorder will develop or how severe and long-lasting such an event will be it seems more likely than not that significant upheavals lie within the next five to ten years or less.  It is also apparent that such developments will impact most communities and that existing law enforcement and emergency response agencies may be inadequate to maintain order, protect the public and prevent looting and property damage. The responsible citizen should be prepared to cope with the challenges of home defense, self-defense, property protection, and if necessary evacuation through hostile surroundings.  Since such situations could also interrupt food supplies, water and electrical services, and access to medical care, the citizen must stock up and build basic survival capabilities as well.  The possibility of massive and enduring periods of civil disorder must be added to the already long list of potential survival challenges that the responsible American citizen of this century must prepare to face unaided if necessary.